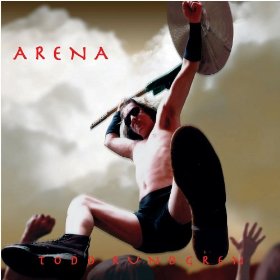 Here are my favorite albums of 2008 in order of preference.

Arena (Todd Rundgren)
Without a doubt, my most-listened-to album of 2008. Some of my fave moments on the album remind me of P.O.V. (Utopia), and I enjoy all the rest as well.

Earth to the Dandy Warhols (The Dandy Warhols)
Great stuff, and like Arena, a pleasant mix of old sounds and new in terms of the respective artists and their output. With the exception of “Mis Amigos,” I gave these tracks lots of plays. It seems like I waited forever for this album, and the Dandys made it worth the wait.

Funplex (The B-52’s)
The B-52’s have always been a guilty pleasure of mine, and this album was no exception. I would have preferred more of the distinctive guitar sounds I have come to enjoy from this group, but that did not detract from the fun.

Brown Submarine (Boston Spaceships)
This debut CD from Robert Pollard’s new band got my vote for Surprise of the Year. I sometimes listen to a song I really like over and over, and “Two Girl Area” (track 5) was one of those in 2008.